Green City Solutions’ (GCS) vision is “Living healthily with every breath.” This means creating cities in which people can live a healthy life by creating living conditions that allow all people around the world to permanently have cleaner air to breathe. Green City Solutions is based in Berlin and offers the world’s first bio-tech filter to quantifiably improve air quality in cities. This filter uses the ability of certain moss cultures to filter pollutants such as particulate matter and nitrogen oxides from the air.

The main problem that is targeted by Green City Solutions is the air pollution in cities. Air purification is a great challenge in cities through industrial emissions and traffic. In addition, mosses have a strong positive environmental effect but are barely able to survive within cities due to their need for water and shade.

The core product and solution is a moss filter, which is based on the unique idea of combining nature with the latest IoT technology in a so-called CityTree to produce fresh air and to bring nature back to the city. This moss filter is built by connecting different mosses with fully automated water and nutrient provision. The integrated IoT technology delivers comprehensive information on performance and status as well as environmental data on the CityTree’s surroundings. The controllable ventilation technology allows airflow to be intensified, meaning that the filter effect can be increased as required. 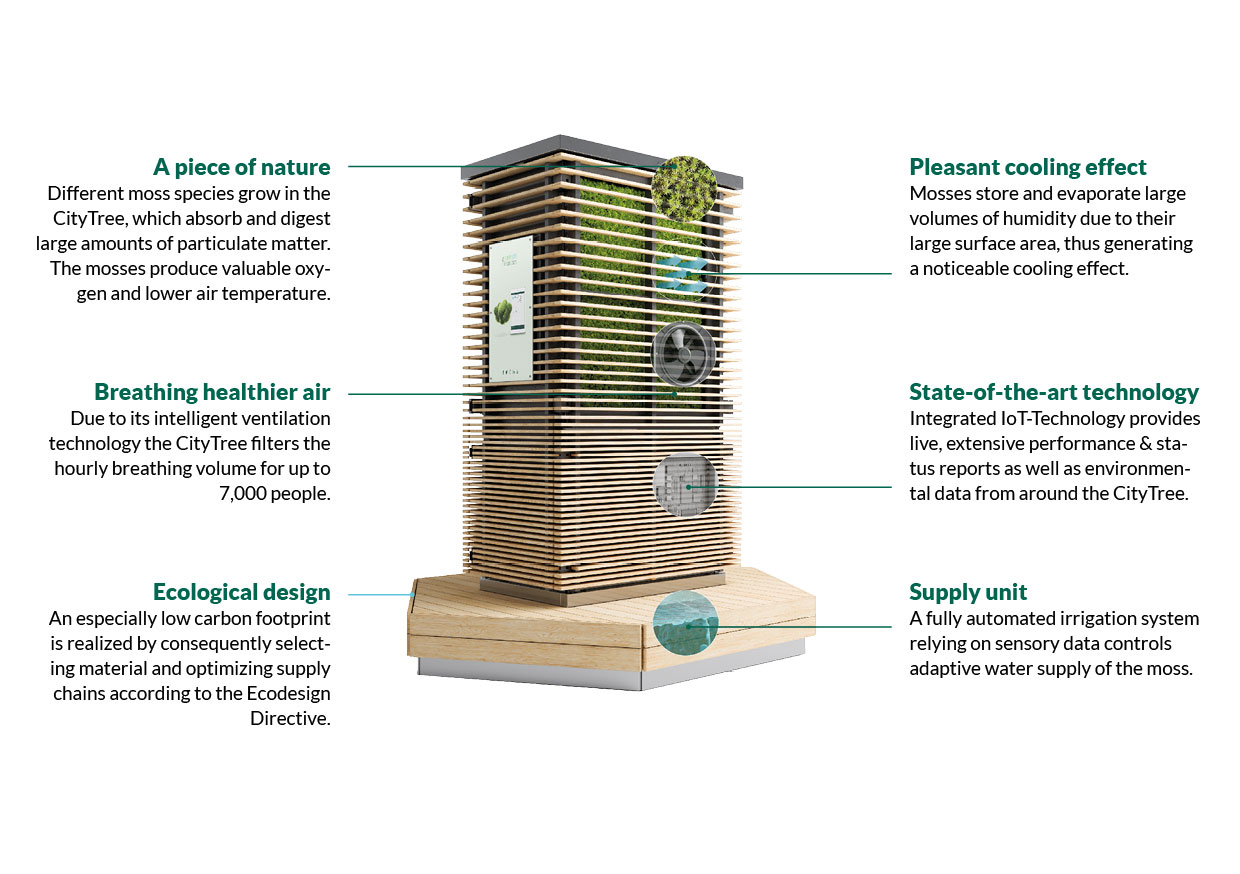 The air filtering performance is quantitatively proven and the plants’ requirements are measured in real time. One CityTree can reduce the particle pollution by 82% and the cooling effect measured indoors is -4°. A CityTree cleans the air equivalent to the lung volume of 7.000 people in an hour. In the first Clean-Air-Zone in Berlin GCS has filtered a total of 4.934.941m³ of air since installation on March 12th 2020. That is almost the amount of two Olympic swimming pools filled with fresh air.

Green City Solutions was founded in March 2014. One month later they already presented their first prototype. In April 2015 the first CityTree was “planted” in Jena Germany and some months later two CityTrees were implemented in the city of Oslo. At the end of the same year, the company was able to win the first place in the field of “environment” in the German initiative: “Germany – Country of ideas”. The first CityTree in Asia was planted in July 2016 in Hong Kong. Couple of months later the organization opened their first office in Berlin and in December 2016 the first financing round was successfully performed. Until the end of 2017 the company was able to implement over 30 trees in more than 10 countries and until October 2018 even more than 50 of them. Their MossTree-Project won subsidies of the EU-Programme for research and innovation in March of 2019. This enabled them to start their serial production of the CityTree 2020 in October 2019.